In Anglona in a frame of Romanesque churches and domus de Janas stands a modern winery whose main objective is to produce wines whose flavors and fragrances are the expression of an ancient land full of history that is Sardinia. So Gianluigi and Silvia with their daughters wanted to realize their project: to give new life to viticulture in widespread past in the heart of Anglona, ​​bringing their culture and love of wine in an area with enormous potential. In deep soils, mainly composed of reddish trachyte and white limestone, grow vineyards composed of native varieties such as Cannonau, Vermentino and Bovale, but also from international varieties such as Cabernet Sauvignon, Cabernet Franc and Merlot. Frequent rocky spikes that alternate to the hilly landscape, create a natural barrier to the strong salty winds of the mistral from the Gulf of Asinara. While the sweet streams windy descendants from the ridges of the mountains of Gallura, guarantee an excursion between day and night, optimally during the ripening of the grapes. 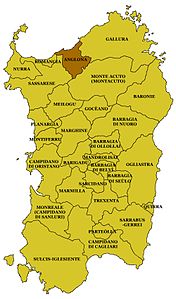